The Lost Realms – Book Four of the Earth Chronicles 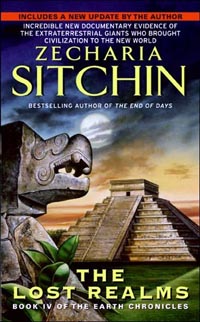 Chapter 1: El Dorado
Chapter 2: The Lost Realm of Cain?
Chapter 3: Realm of the Serpent Gods
Chapter 4: Skywatchers in the Jungles
Chapter 5: Strangers from across the Seas
Chapter 6: Realm of the Golden Wand
Chapter 7: The Day the Sun Stood Still
Chapter 8: The Ways of Heaven
Chapter 9: Cities Lost and Found
Chapter 10: “Baalbek of the New World”
Chapter 11: A Land of Which the Ingots Come
Chapter 12: Gods of the Golden Tears

Thousands of Years Before the Birth of Christ, Giants Roamed the Earth

In the sixteenth century, Spanish conquerors came to the New World in search of El Dorado, the fabled city of gold. Instead, they encountered inexplicable phenomena that have puzzled scholars and historians ever since: massive stone edifices constructed in the Earth’s most inaccessible regions… great monuments forged with impossible skill and unknown tools… intricate carvings describing the events and topography of half a world away.

In this, the remarkably and thoroughly researched fourth volume of THE EARTH CHRONICLES, author Zecharia Sitchin uncovers the long-hidden secrets of the lost civilizations of the pre-Columbian Americas and offers documentation of the giant gods who spawned the greatness of the Incans, Mayans, and Aztecs—the Anunnaki—”those who from Heaven to Earth came.”

In the annals of Europe the discovery of the New World bears the imprint of El Dorado—the relentless search for gold. But little did the conquistadors realize that they were only replaying a search, on Earth and in these new lands, that had taken place eons earlier!

Buried under the records and tales of avarice, plunder, and wanton destruction that the newly found riches had triggered, there is also evidence in the chronicles of that time of how bewildered the Europeans had been to come upon civilizations that were so akin to those of the Old World: kingdoms and royal courts, cities and sacred precincts, art and poetry, sky-high temples, priests—and the symbol of the cross and a belief in a Creator of All. Last but not least, there were the legends of white and bearded gods who had left but did promise to return.

The mysteries and enigmas of the Maya, the Aztecs, the Incas, and their predecessors that puzzled the conquistadors still baffle scholar and layman alike five centuries later.

"How, then, and why did such great civilizations arise in the New World, and is it mere coincidence that the more that is known about them, the more they appear to have been molded after the civilizations of the ancient Near East?

It is our contention that the answers can be found only by accepting as fact, not as myth, the presence on Earth of the Anunnaki, "Those Who From Heaven to Earth Came."

This book offers the evidence. 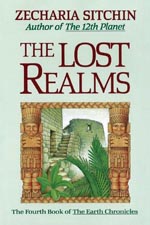