Corey Kilgannon of the New York Times talked with Zecharia Sitchin in 2010, discussing his daily routine living in New York city as well as addressing topics from the Earth Chronicles books. Sitchin was 90 years old when giving this interview, and still appeared as quick witted as ever. 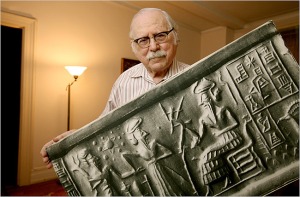 WHERE did humankind come from?

If you’re going to ask Zecharia Sitchin, be ready for a “Planet of the Apes” scenario: spaceships and hieroglyphics, genetic mutations and mutinous space aliens in gold mines.

It sounds like science fiction, but Mr. Sitchin is sure this is how it all went down hundreds of thousands of years ago in Mesopotamia. Humans were genetically engineered by extraterrestrials, he said, pointing to ancient texts to prove it.

Read the entire article at:
Origin of the Species, From an Alien View, January 8, 2010 (New York Times)