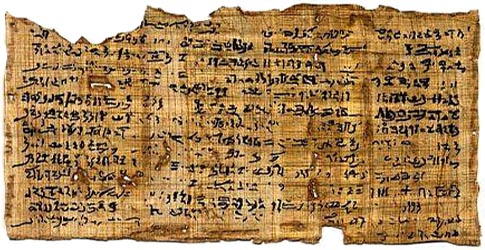 In the early 19th Century a papyrus, dating from the end of the Middle Kingdom, was found in Egypt. It was taken to the Leiden Museum in Holland and interpreted by A.H. Gardiner in 1909. The complete papyrus can be found in the book Admonitions of an Egyptian from a heiratic papyrus in Leiden. The papyrus describes violent upheavals in Egypt, starvation, drought, escape of slaves (with the wealth of the Egyptians), and death throughout the land. The papyrus was written by an Egyptian named Ipuwer and appears to be an eyewitness account of the effects of the Exodus plagues from the perspective of an average Egyptian. Below are excerpts from the papyrus together with their parallels in the Book of Exodus.

It is impossible to give a date for the composition of this document. The surviving papyrus (Papyrus Leiden 334) itself is a copy made during the New Kingdom. Ipuwer is generally supposed to have lived during the Middle Kingdom or the Second Intermediate Period, and the catastrophes he bewails to have taken place four centuries earlier during the First Intermediate Period. Lacunae in the papyrus text are marked by […].